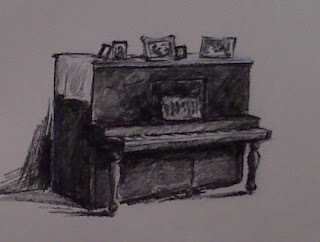 I’m working on a small series of mixed media collages from a short story. This is the first drawing for possible use. Charcoal approx. 6″X 8″.

I enjoy the organization and system of the old library card catalogs and similar outdated systems. Printed text has changed considerably with the advent of digital media and with that refinement a certain amount of apparent human connection with the writing. I am working with the idea of a system that, in a sense, removes that personal impact from the resulting creation while, because of the inherent flaws and unique characteristics of the typewriter, a trace of human contact is remains. 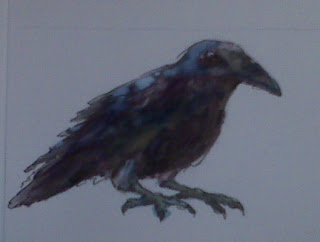 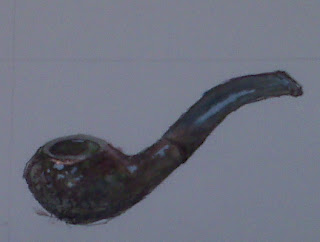 Working on a couple of ideas tonight on iconogrphy. Watercolor and india ink.

The text, though difficult to read, is about Randy Cunningham, a congressman convicted of accepting bribes for war related government contracts.

As time moves on and the fog dissipates, information floats to the surface. This information suggests the worst as reported by Bill Moyer.

During the first gulf war I considered myself lucky as I was on my way home from a west-pac when Iraq invaded Kuwait. I missed my girlfriend and thought I finally knew what it was to be an American. Believe me, no one knows what it means to be American until they’ve been away from it, they only suspect. I paid my respects to those who gave their lives for my country in Pearl Harbor as we manned the rails when we pulled into port. I lost countrymen and acquaintances over the Mariana Trench off the coast of Japan as their helo went down and no bodies were recovered. This time was served in the defense of my nation; it was an honor to serve.
Along with that honor comes a certain amount of trust. I trusted, as as most sailors and soldiers do, in the judgment of our civilian leaders to be deployed in our nations defense. Now I’ve come to understand that defense is not always clear as at times service in small military actions can defend my nation such as a call to certain commitments for the United Nations. Yet I trust that these too are for the protection of life and nothing less. This service is not for a way of life (and by that I do not mean fundamental values of my nations such as liberty and equality but in the sense of certain conveniences we’ve come to expect as Americans, like football on Sunday or disposable coffee cups on our way to work) but for life itself. My trust appears to have been betrayed as my service has been at least partly for the protection of American business interests. As if I was not defending my country or the freedom of my countrymen but the market for a few industry leaders. Now, I must point out this does not mean my service was not honorable or that the lives of American servicemen and women that were lost or altered in the service of our country was in any way less than honorable, I am saying that the trust we put in our civilian leadership has been betrayed.

No blood for oil! It has not been shed for oil but for country. Those that betrayed our trust must be held accountable. They know there has been blood for oil.

I’ve been mulling over some ideas about artist communities and how I think they should be established. As I work to get my own studio off the ground while earning a regular salary as a high school teacher I wonder how difficult it must be for those fresh out of college. Where would one start? “Flip burgers” or work an empty job just to pay the student loans seems to be the common path though I would propose that the frustration faced by the average artist must be exacerbated when also faced with a dead end job where time spent does little for the future. A far greater guarantee seems to be some sort of parental support or other means of income such as that enjoyed by Cezanne or Frankenthaler. This kind of security appears to allow a certain amount of freedom as both Cezanne and Frankethaler were able to pursue new ways of making art without initial commercial success. I can’t help but wonder if Frankenthaler might not have painting happy little trees in an impressionist manner if she depended on the sales of her work for the food on her table. If that were the case she may have stayed “safe” rather than risk being sorry for her large color stain paintings. (I don’t think she was “sorry,” probably just the opposite, I am just trying draw attention to the risks an artist faces when exploring individual expression.) Now if security is not available from some preexisting source as in these last two cases it must be made up by the first, that is unless the community is willing to accept some of this risk faced by artists.

Why would a community even want to accept some of this risk? I mean, does the accept any risk for its other members? Sure it does! Tax breaks are often advertised to businesses to relocate to a community. Local newspapers promote new business as if they were real news items all the time. These are just a couple of examples of the risk as it is accepted by the community for the sake of its members. Of course it is the community in general that benefits from the acceptance of some of these “risky” endeavors: Jobs are created, the tax base is expanded so additional services and civic works can be completed, and of course citizens hear about a lot of tasty new restaurants that open up.

“What about art?” you might ask. Why would a community accept the risk inherent in any new art form? Why should we care if an artist sinks or swims? The answer to that lies in humanity itself- that is the big answer- in that as human beings we derive a large part of our lifes quality from the things we see around us. Proof for this can be found in the cars we drive, the shoes we wear, and the shape of the cell phone we keep on our being at all times. “Sure.” you might say, “but those are things we need and as we all know “art is useless.” (I’m not saying that, Andy Warhol did- besides that would contradict myself- ooh, sorry, almost another quote, I’ll try to stop myself) “Form always follows function” you might say but I say, “function fills a need that’s true, but form sells- form is what we want!” So, in short, by having artists around we get what we want and that promotes a greater quality of life. (Was that too much of a jump to the simplistic? Probably.) Therefor, most artists need communities and communities want artists.

Now it is important for me to admit ignorance on the details of many communities though I am familiar with a few and I have, at least a bit of information on a number of civic programs to promote the arts in communities in my area of the United States. Artists need three things for initial establishment assuming, of course, their work is of reasonable merit (this is not required, however). I think I’ll focus on these three things in my next few posts: I want to look at each one in some depth to explain what I think is needed and what a community can do to promote a healthy environment for the arts to develop.

I have always been interested in the sketches of the masters- da Vinci, Michelangelo, it didn’t matter; I found the raw idea very interesting, perhaps even more interesting than their finished paintings. A sketch carries a sense of freshness, an urgency or a moment in time unencumbered by refinement and rethinking. In many ways there is a purity in a sketch that is difficult to express in a finished painting. I beleive that same freshness is much the same feeling the German expressionists like those in the Blaue Reiter and Die Brücke tried to present in their work. Naturally context for painting has changed from Europe between the wars as has the subject matter but the essence- human emotion, response, and discourse has not.

In my work I try to reverse the painting process, so to speak. You see, it is my understanding that paintings usually begin on a piece of scratch paper, on a napkin, or in a sketchbook somewhere. Then it is refined, edited, paired down to simplest terms, and put onto canvas in paint or collage or whatever. I do this too, but in my work the painting usually begins with the idea written into my sketchbook and several sketches added of how the idea may be represented visually or metaphorically. Following this I collect additional material like newspaper articles or research on the subject to flesh the idea out a bit more. Then I set up some problems to be solved on the canvas like the devision of space, relationship of the elements, ect. by painting a few of them on the canvas then adding or reducing as need be. Lastly I try to add once again the sketch right out of my sketchbook onto the top “layer” of my painting. An example of this may be “Repetitive Pump in Purple“. In a way I want to invert a painting so others can see the process the idea goes through in the work. I hope this last sketch carries the freshness or urgency of the original idea in some way.

In Norse mythology Odin has two pet ravens: Hugin and Munin– thought and memory accordingly. Each day they leave Odin and return from “Midgard,” (literal meaning: middle enclosure) the mortal realm. The only historic pictures I’ve found of this show Hugin (thought) on Odin’s right shoulder facing him and Munin (memory) on his right.

The Quran tells of a raven teaching Cain how to bury Abel and Native American traditions from the pacific northwest see the raven as both a creator and a “trickster” god.

The cross cultural significance of the raven is quite amazing but I find the Norse representation as the most interesting mostly for the news or information being that of thought and memory- very different from our understanding of it in contemporary culture. In the Norse mythology the “news” is understood to be subjective- interpreted through thought and memory.

In Work
Blog at WordPress.com.